The Internet Protocol (IP) is the most computer communication protocol today. It is the base protocol used for Internet communication such as e-mail, web and multimedia. One of the reasons for its popularity is its scalability. In other words, it works as well in very small installations as it does in very large ones and is supported by an increasingly wide range of high performance, low-cost and industry-proven equipment and technologies.

Based on IP protocol, Integras network video products have the advantage of being able to directly and seamlessly connect to a whole range of Ethernet devices.

Integra video servers integrate easily into your existing analog CCTV (closed circuit television) system. You can acquire all the benefits that digital technology offers without scrapping your investment in an analog system.

A video server digitizes analog(Standard CCTV Cameras) video signals and sends digital images directly over an IP network, such as a LAN, intranet or Internet. It essentially turns an analog video system into a network video system and enables users to view live images using a Web browser or a video management software on any local or remote computer on a network. It allows authorized viewers from different locations to simultaneously access images from the same analog camera, as well as network cameras if they are added to the system.

A network camera can be described as a camera and computer combined in one unit. It captures and transmits live images directly over an IP network, enabling authorized users to locally or remotely view, store, and manage video over standard IP-based network infrastructure.

A network camera has its own IP address. It is connected to the network and has a built-in web server, FTP server, FTP client,e-mail client, alarm management, programmability, and much more. A network camera does not need to be connected to a PC; it operates independently and can be placed wherever there is an IP network connection. A Web camera, on the other hand, requires connection to a PC via a USB or IEEE1394 port and a PC to operate.

In addition to video, a network camera also includes other functionalities and information being transported over the same network connection, i.e. video motion detection, audio, digital inputs and outputs (which can be used, for example, to trigger alarms or turn on lights), serial port(s) for serial data or control of pan/tilt/zoom mechanisms. Image buffers within a network camera can also save and send images that were collected before an alarm occurred. 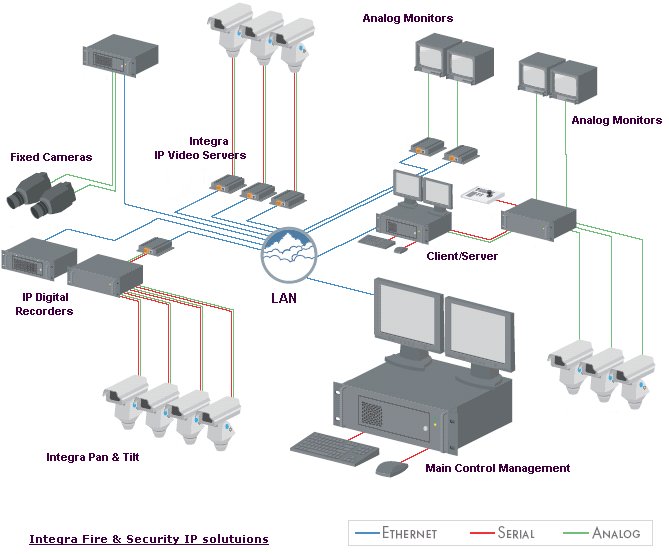